This RFC has been merged

This document proposes an approach to supporting SSR rehydration in LWC.

The motivations for SSR are well documented and can be boiled down to the following two points:

However, rendering on the server can itself introduce performance issues, working against the original intent. Namely, if DOM that was generated from SSR HTML is not preserved during the initial CSR, this will result in potentially expensive DOM manipulation and unwanted visual artifacts.

The aim of rehydration is to avoid the client-side performance issues of a naive SSR implementation, reusing original DOM wherever possible.

With regard to SSR, there exists a happy path (Fig 1a) where the rendering output for a given request is identical on both the server and the client; identical VDOM is generated for the entire document in both environments.

Depending upon the actual implementation, exceptions to this happy path include:

Several pieces need to come together to unlock rehydration. The general flow is illustrated below in figure 2.

In roughly chronological order with respect to a single page request, the following steps shall be taken as part of rehydration:

Note: We will not serialize @api or @track state on the server and rehydrate on the client. State will only be accepted for the root component via hydrateElement, and it is beholden on downstream developers to ensure their server-side and client-side state is identical.

There is a spectrum of choices possible when encountering an unexpected mismatch during rehydration. The following is a sampling from that spectrum:

The approach that we propose for adoption is #3. Specifically:

If we determine that this behavior has undesirable performance characteristics, we will pivot to approach #2.

It might happen that an error is thrown while invoking the connectedCallback or other lifecycle method. This situation could occur because:

We will want to recover from #2. And because it won't be possible to differentiate #1 and #2 at runtime, a catch-all solution must be adopted.

It is proposed that, should an error be thrown during connectedCallback, we should assume that an unexpected mismatch has occurred, throw away the SSR DOM, and replace it with CSR VDOM. The connectedCallback will then be invoked again (connectedCallback can fire more than once), this time for the CSR DOM.

If an error occurs again, we can assume its proximate cause is in userland and not in LWC.

In a typical LWC web application, a developer might mount their app using the following pattern:

After the proposed change, if a developer wants to take advantage of rehydration, a developer would instead do:

From there, we have two options if support for constructable stylesheets is detected during rehydration:

For these reasons, it is proposed that constructable stylesheets be disabled during hydration, and during the lifetime of the component instance.

Addressing Special Case B will involve a solution roughly comparable to React server components. While the bulk of this can be implemented in user-land, at a level of abstraction above LWC, the hydrateElement patch implementation will need to support the use-case.

However, we consider support for this case to be out-of-scope for the initial implementation. We will explore further as part of a separate RFC.

Implementation of placeholder components, as described in Special Case A should require no extra effort, so long as unexpected subtree mismatches (Special Case C) are dealt with properly.

The following is an example of how this might be accomplished, although it is important to note that any such implementation is outside the scope of LWC and should be handled downstream.

Without safe-guards, it might happen that customElements.define is invoked with SSR-serialized custom elements already in the DOM prior to the invocation of hydrateElement, leading to unexpected behavior. The following list enumerates the conditions that may be encountered and how we plan to handle them.

# How we teach this

Much like the new functionality itself, the documentation for SSR rehydration is purely additive. We won't be changing the behavior or API of existing features.

Beneficial documentation may include:

# Survey of prior art

A handful of influential web frameworks and state management libraries were examined in relation to rehydration and adjacent concerns. The findings are summarized as follows: 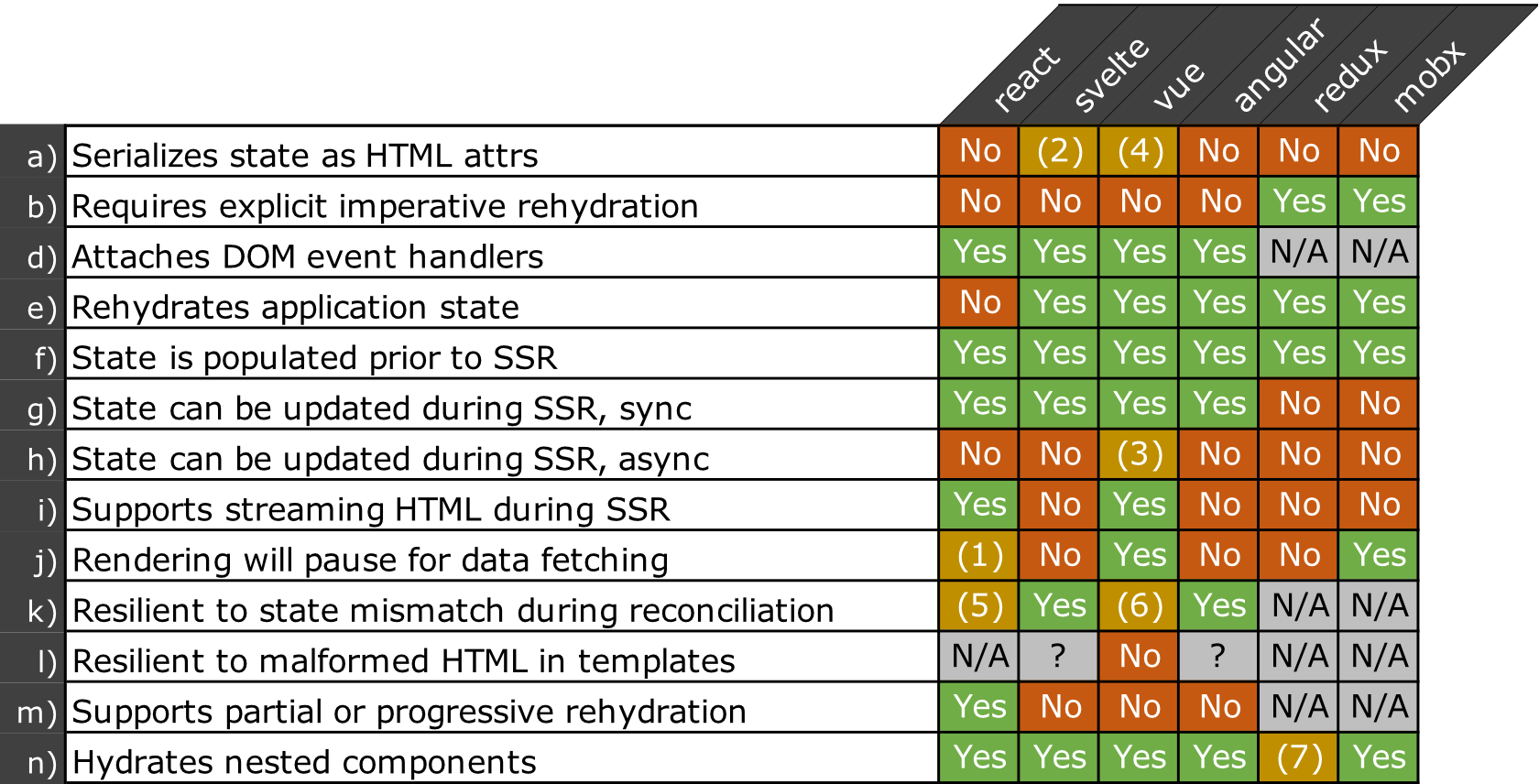